Please be advised that I represent Melyssa Hubbard. I write this letter in regard to the meeting
of adherents of the First Church of Cannabis (“Church”) planned for Wednesday, July 1.
I saw news footage of your and the Public Safety Director’s press conference in regard to the
July 1 event. I understand you and officers from law enforcement agencies, of competent jurisdiction,
will enforce the law. You mentioned, in your press conference, that such enforcement would include
the arrest of persons who do not possess marijuana, or have active warrants out, for visiting a common nuisance, I.C. § 35-48-4-13. I infer the basis for an arrest for visiting a common nuisance would be (1) the arrested person “knowingly or intentionally” (2) visited the building that presently houses the Churchand (3) persons intend to unlawfully use a controlled substance, in this case marijuana.

My client has spoken with leaders of the Church. It is her understanding that those persons
have advised any persons who intend to attend the July 1 event NOT to either bring, possess or
otherwise consume marijuana. One of the persons with whom she spoke is counsel for the Church.

Arguments of the merits of claims of legitimacy of the Church as a religion aside, the leaders
specifically plan not to bring, possess or otherwise consume marijuana to the event. Those same
leaders advise attendees of the same prohibition. If those are the plans and the instructions, my client is not knowingly or intentionally visiting a place for anything but her rights to free expression, assembly and exercise of her religion under the First Amendment of the United States Constitution.

She also will engage in exercise of her rights under Article 1 of the Indiana Constitution to worship (§ 2); the free exercise and enjoyment of her religious opinions and rights of conscience (§3); freedom of religion (§4);the right to free interchange of thought and opinion and her right to speak, write or print freely (§9); and her right to assemble (§ 31).

My client is an activist and published writer. She wants to attend the July 1 event for several
reasons, including as part of her next book. In a recent interview, published in Barcelona, of my client, my client stated her next book will be “about Indianapolis that will pick up after my first book’s final chapter, ‘The Diana Mythology’. Its backdrop will be the Masonic masculine and feminine symbolism of our city as Libertarianism, the Tea Party movement, Religious Freedom Restoration Act, and the First Church of Cannabis plays out against the rise of Goddess Diana archetype of InDianapolis. I plan to call the book ‘The InDiana’ Code’ and already own the domain.”

I understand your concerns for enforcement of the law. As I recall, when I took my oath on
June 9, 1989, and became a lawyer, I swore to uphold the laws of our State as well as the Constitution
of the United States and the Indiana Constitution. In this instance, the event coordinators, as well as
counsel for the Church, have stated they will not have marijuana at the event. Those persons also have informed would-be attendees, amongst whom is my client, that marijuana at the event is prohibited. If someone attends the event and violates the instructions from the coordinators of the event, then to arrest people who attend the event would constitute a chilling effect on the First Amendment as well as the applicable provisions of the Indiana Constitution.

In this light, I ask only that you reconsider your stated position to arrest for visiting a common
nuisance attendees, who themselves neither possess nor consume marijuana, if someone violates, by
smoking or possessing marijuana, the instructions of event organizers. If someone appears at the event with marijuana and is arrested, that person will have done so without either my client’s knowledge or intent. My client’s attendance of the event is based on legitimate reasons protected by our constitutions.

Sincerely,
Mark Small
Posted by Melyssa Hubbard at 10:48 AM 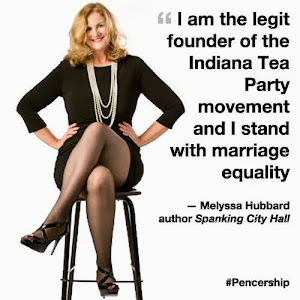